Many tools exist to ease the transition. For example, I have been wrapping up some Fortran into Python via F2PY, which seems like a very convenient way to use (and distribute) efficient Fortran code that anybody can run.

Now, Julia aims to solve this issue in a radical way. The idea is to use a single programming language, which has both an interactive mode, suitable for rapid prototyping, but which can also be compiled and executed at C/Fortran performance.

Opinions on code readability are, of course, subjective. However, I want to explain why I think Numpy doesn’t offer the best quality experience in terms of code clarity.

The Julia syntax is a lot closer to the math. As for loops are fast, we don’t have to worry much about vectorization or anything like that, which takes more time to write, and is obfuscating what the code does.

So even though I fully agree with the idea than Python is a beautiful language to work with, I don’t think the same holds for addons such as Numpy.

Yes, Numpy allows us to stay within a Python framework and get things done with simple one-liners (which is pretty neat anyway) but the resulting Numpy code is much harder to read than a simple loop, even in this extremely simple example.

If we can predict what the major performance bottlenecks of our code will be,then come up with a minimalistic, but spot-on example, and create a specific performance test that suits our needs.

In my numerical projects, for example, I do a lot of array operations and I evaluate a lot of complex exponentials. So that’s why this test is about just that.

My benchmark was already described above, it’s just: given a vector a, form the matrix

As a first test, I opted for out-of-the-box minimalistic codes in each language.

So I wrote a Julia version with no package dependencies whatsoever, and a Fortran code which I could call from Python by wrapping it using F2PY.

Note: ST and MT stand for single-threaded and multithreaded, respectively.

Honestly, I was shocked by what I found in this comparison. I was willing to give Julia a try even if that meant sacrificing a tiny bit of performance, but it seems that there is no need for such a compromise. Julia is amazing.

The complete source code of the tests can be found in this Github repository. The repository includes both basic implementations, and highly-optimized codes. The repository also includes additional ways to speed up Python like Cython, and Numba, for now.

But before getting into such details, let’s review the most basic version of this test (i.e. those that use the simplest possible code and the most convenient setting).

Interestingly, from the above table, we can compute the threading efficiency, which is the speed-up factor when moving from single-threaded to multi-threaded. 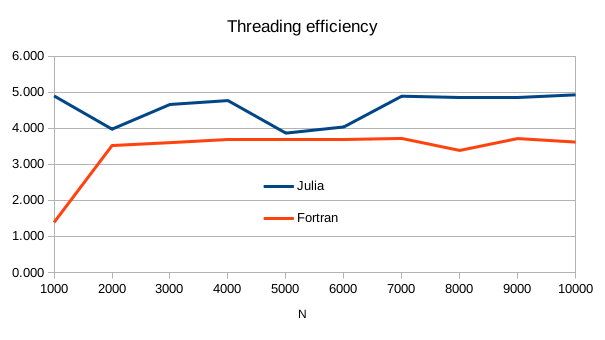 In a quad-core CPU, Julia’s native multithreading efficiency is about 4.9, whereas when relying on gfortran and OpenMP, we get about 3.6. So Julia is effectively taking advantage of hyperthreading, something which is rarely seen in OpenMP.

This is not necessarily related to the program spending time at the interface (actually, the F2PY performance report shows only 10% of the time being spent there) but there is perhaps a more fundamental limitation of mixed-language programming going on here.

As the code we compile is larger, the compiler will have a shot at doing some interprocedure optimizations, while when we call a compiled function from a scripting language there is not such possibility.

So, in order to improve the performance on the Fortran side, we must resort to standalone Fortran code. This version has 10 extra lines of code with respect to the F2PY version, and this comes at the additional cost of resigning interoperability with Python.

In my case, I am only considering Fortran as a part of a two-language solution that includes Python. In the future, LFortran will likely become a real alternative.

In the meantime, Julia does look like a great option, at least for my use case. I also find the permissive open-source license much desirable, as well.

I will be uploading more benchmark cases to the Github repository, in particular to dig deeper into the various alternatives for making Python fast. If you want to contribute to the testing, you are more than welcome!

If you want to get started coding in Julia, you can also check out a series of posts I’m writing: Numerical Computing in Julia: A Hands-On Tutorial.

Do you need help with Julia?

If you need an extra hand for your current Julia project, don’t forget that it can be very handy to hire a freelancer developer or tutor, like the ones recommended below by Fiverr: